A Tale of Two Seafood Restaurants

Sid-Mars of Bucktown and Deanie’s Seafood — two legendary Bucktown seafood restaurants, only a few hundred yards away from each other. Both behind one side of the 17th Street Canal levee, but one one higher ground than the other. On August 31, 2005, one restaurant (and the neighborhood it was in) was destroyed by a massive rush of water from storm surge and the other was left completely unharmed.

In May of 2005 my wife Rachel and I visited Sid-Mars restaurant, which was a very large structure that stood for over 38 years. It had a wonderful view in the back of Lake Pontchartrain, where you would wait for your table and have a couple of cocktails, and maybe make a couple of new friends.

Looking out onto the lake.

Two months after our visit, Hurricane Katrina hit the city. As a result of the storm surge and insufficient structural reinforcement and engineering problems, the levee flood wall behind Sid-Mars adjoining New Orleans broke, letting in millions of tons of water into New Orleans and flooding the surrounding neighborhoods. Sid-Mars, which was close to the other side of the levee, was wiped out by the overflow of storm surge, and didn’t even have a chance.

This is what the site of Sid Mars looks like today. Its surrounded by a wire fence, so I was unable to photograph it from an identical vantage point. But it should give you an idea.

The demolitions/construction site. Its not likely another restaurant will be built here.

The view is still phenomenal, however.

I felt Sid-Mars was a better drinking spot than a restaurant, so I was relieved that Deanie’s escaped the destruction. Deanie’s is probably one of the best seafood joints in the entire city — if you’re looking for a shrimp or crawfish boil, or some barbecued shrimp, or some jumbo fried seafood platters, Deanie’s is your place. 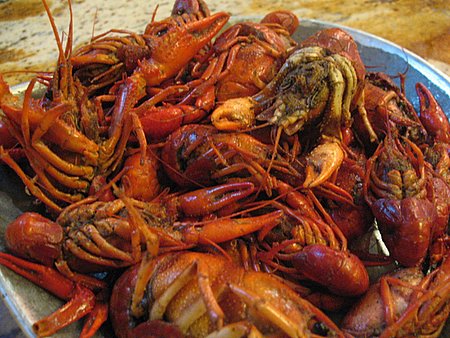 Crawfish is ordered by the pound.

The very happy and lively dining crowds at Deanies.

This entry was posted on Saturday, April 8th, 2006 at 2:42 pm and is filed under eGullet, Food, General, New Orleans. You can follow any responses to this entry through the RSS 2.0 feed. You can leave a response, or trackback from your own site.

7 Responses to A Tale of Two Seafood Restaurants