I think if you want to see the real New Orleans, you have to go and eat the the blue collar type places. And there’s nothing more New Orleans and blue collar than a Po’Boy shop.

Food writer Sara Roahen in her upcoming February 2008 book Gumbo Tales talks about a specific Po’Boy that has gone extinct, the Pepper Weiner at Domilise’s. Apparently it was some type of special sausage or hot dog that was dressed in a special way, and it was beloved by many. In any case, the Schott’s Meat company in New Orleans that manufactured the Pepper Weiner has since gone out of business, and thus it now Rests in Peace.

Domilise’s, located in the Uptown section of the city near the Prytania/Upperline area off of Tchoupitoulas street, however, is still going strong, and it has been for many decades. Regarded as one of the best sandwich shops in the city, It is a true Po’Boy shop in every respect, and makes them in a very traditional fashion, using real New Orleans French bread.

Domilise’s as you can see is very much a locals hangout.

There’s nothing more honest and satisfying than a New Orleans Po Boy. Click on the “Read the rest of this entry” link below for more.

END_OF_DOCUMENT_TOKEN_TO_BE_REPLACED

Many restaurants in New Orleans can legitimately call themselves cultural landmarks. And yet, when Hurricane Katrina came, the levees broke and the city flooded, there was a very short list of foodie destinations in the affected areas where I thought it would be a monumental tragedy if they never returned to business again. Magnificent restaurants like Commander’s Palace. Neighborhood hangouts like Angelo Brocato’s. And little holes in the wall like Willie Mae’s Scotch House, which is arguably the fried chicken Mecca of the United States and has huge historical value to the civil rights movement, much like the original Paschal’s in Atlanta.

It was a huge, Herculean task to bring Willie Mae’s Scotch House back from the dead. The water line from the flooding was several feet high, and the entire restaurant had to be gutted to the studs. A huge volunteer reconstruction project started in January of 2006 funded by over $200,000 in donations solicited by the Southern Foodways Alliance eventually resulted in the re-opening of the restaurant in May of 2007 (A short SFA film directed by filmmaker Joe York, “Saving Willie Mae’s Scotch House” chronicled the project.)

Upon re-opening of the restaurant, Ms Seaton, age 90, relinquished her place as head cook to her great granddaughter, Kerry Blackmon. However, despite organizational changes, the Fried Chicken is as great as ever.

It was fitting that we got to eat at Willie Mae’s on August 29. Click on the “Read the rest of this entry” link below for more.

END_OF_DOCUMENT_TOKEN_TO_BE_REPLACED

One of the restaurants in New Orleans I most wanted to dine at was COCHON, a new, Post-Katrina casual fine dining restaurant that was opened by Donald Link, of Herbsaint fame and 2007 James Beard Award Winner for Best Chef, South (click for previous OTB podcast) who I interviewed during my previous New Orleans trip back in April of 2006. At the time, the finishing touches of COCHON had just been done, and the restaurant was preparing to open only days after I returned home. Now, over a year later, COCHON has become one of New Orleans’ top restaurants, and was nominated as “Best New Restaurant” in the 2007 James Beard Awards.

Best described as “Modern Cajun” COCHON incorporates many elements of traditional Cajun cuisine combined with twists from Europe and Asia. Although the food and the restaurant would easily find itself in New York’s hip SoHo and Greenwich Village or among the top fine dining establishments in Midtown Manhattan, it is most definitely a New Orleans restaurant and one of the city’s finest examples at that.

Is COCHON Hillbilly or Haute? I think it’s a bit of both. Click on the “Read the rest of this entry” link below for more.

END_OF_DOCUMENT_TOKEN_TO_BE_REPLACED

Every time I visit New Orleans, Drago’s restaurant in nearby Metairie is always on the top of my to-go list. Their charbroiled oysters are my absolute favorite and you can make a meal of them just by themselves. We had tried to eat there on our first night back, but had discovered the restaurant was closed on Sunday.

Later on in the week we discovered that Drago’s owner Tommy Cvitanovich had opened a brand new location in the downtown Hilton hotel, near the Riverwalk shopping center. As we were across the street at Grand Isle checking out their happy hour, I absolutely had to try the new place and see if it lived up to the original.

The new Drago’s location at the downtown Hilton Riverside.

END_OF_DOCUMENT_TOKEN_TO_BE_REPLACED

A Tale of Two Seafood Restaurants

Sid-Mars of Bucktown and Deanie’s Seafood — two legendary Bucktown seafood restaurants, only a few hundred yards away from each other. Both behind one side of the 17th Street Canal levee, but one one higher ground than the other. On August 31, 2005, one restaurant (and the neighborhood it was in) was destroyed by a massive rush of water from storm surge and the other was left completely unharmed.

In May of 2005 my wife Rachel and I visited Sid-Mars restaurant, which was a very large structure that stood for over 38 years. It had a wonderful view in the back of Lake Pontchartrain, where you would wait for your table and have a couple of cocktails, and maybe make a couple of new friends. 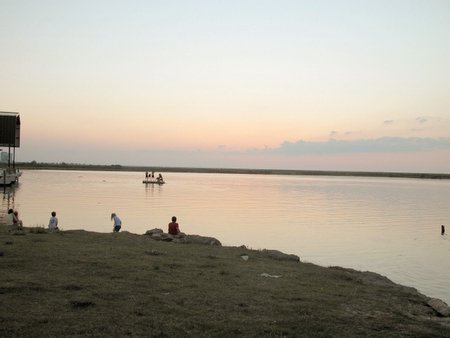 Looking out onto the lake.

Two months after our visit, Hurricane Katrina hit the city. As a result of the storm surge and insufficient structural reinforcement and engineering problems, the levee flood wall behind Sid-Mars adjoining New Orleans broke, letting in millions of tons of water into New Orleans and flooding the surrounding neighborhoods. Sid-Mars, which was close to the other side of the levee, was wiped out by the overflow of storm surge, and didn’t even have a chance.

This is what the site of Sid Mars looks like today. Its surrounded by a wire fence, so I was unable to photograph it from an identical vantage point. But it should give you an idea.

The demolitions/construction site. Its not likely another restaurant will be built here.

The view is still phenomenal, however.

I felt Sid-Mars was a better drinking spot than a restaurant, so I was relieved that Deanie’s escaped the destruction. Deanie’s is probably one of the best seafood joints in the entire city — if you’re looking for a shrimp or crawfish boil, or some barbecued shrimp, or some jumbo fried seafood platters, Deanie’s is your place.

Crawfish is ordered by the pound. 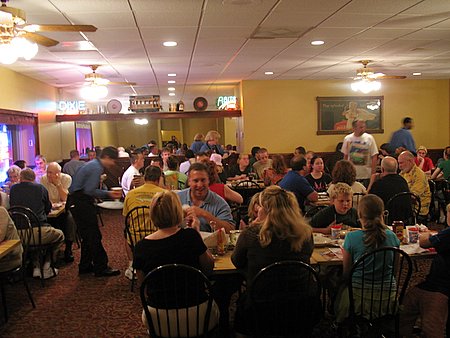 The very happy and lively dining crowds at Deanies.

While Bayona may be nestled in a 200 year old cottage smack in the middle of the French Quarter, it might as well be right in the middle of New York City — this is restaurant cuisine at its very best.

Although Bayona’s food does not necessarily represent typical New Orleans or Louisiana cuisine, which is something a lot of visitors to the city may be looking for, I would definitely return to Bayona again and again — after a week of hardcore Creole and Cajun food, Susan Spicer’s mediterranean and southwest flavors are a very welcome relief and were a great topping to a fantastic vacation in one of the best restaurant towns in the US.

A delicious bread basket of brioche, sourdough and french bread