A few weeks ago I wrote about whether or not Apple will allow the iPad to be an “Open Market” for content providers other than Apple’s own iBooks.

So I did a bit more investigative research, and found out that the good news is that at least for now, the answer is Yes. The bad news? Sister Steven isn’t going to allow you to consume anything naughty. Bad content supplier, Bad! WHACK! You shall now recite the iPad End-User License Agreement ten times as your penance. Thank you Sister Steven, can I have another?

We Officially Terminate our Oath of Fealty to Insane Greatness

Things between Adobe and Apple used to be just peachy. Indeed, almost from the very day the company formed in 1982, it was destined to be the premier supplier of content creation software for the Macintosh, which launched only two years later, in 1984. We all remember what happened in 1984, at least those of us who aren’t Milennials. 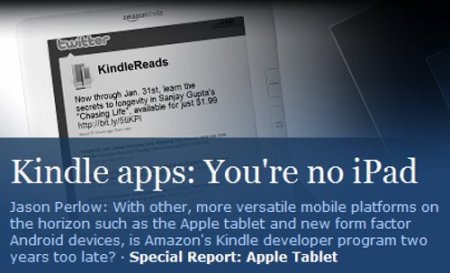 So, Bezos, lemme get this straight. You waited TWO YEARS to launch a Kindle developer program, a week before Jobs launches iPad/iSlate/Jesus Tablet?

Talk about too little, too late.

Best Buy: Dress all the sales reps up like Dumbledore!

My colleagues Mary Jo Foley and Adrian Kingsley-Hughes wrote today about the plans that Microsoft has in place to train retail sales staff at Best Buy how to position PCs with Windows 7 for prospective systems buyers against Apple’s Macintosh systems and of all things, Linux.

This sort of grassroots negative campaigning against the Mac and Linux is really not the way Microsoft should address buyers in the upcoming year and holiday season. Just like negative political campaign advertising and grassroots door to door stomping, it often leaves a bad taste in everyone’s mouth and comes off as completely without class. Worst case, it has even been known to even backfire as a campaign technique. From the perspective of effective sales and marketing tactics, at best I would classify this as bottom feeding.

Snow Leopard Coulda Been a Contenda

I have said on numerous occasions that Apple has missed the boat when it comes to enterprise adoption. This is sad, really, when you consider how good an operating system Mac OS X really is, in that it is the only UNIX-based OS that really could have had any chance in displacing the status quo of Windows and Microsoft hegemony in large enterprise environments with a “full stack” for end-user acceptance as a desktop OS. Consumers may enjoy its niche status, but In the enterprise, Apple is a “Coulda Been” contender of unfulfilled potential.

This week, Apple did the unthinkable — it lowered the price of the existing 8GB iPhone 3G to a mere $99.00. And the world rejoiced, praise be The Fruit and he who no longer weareth the black turtleneck. Yes, I too noticed Schiller was wearing a grey Oxford and Jeans instead of the usual Silicon Beatnik uniform.

Click Here to read the rest of this article on ZDNet Tech Broiler.

Adrian Kingsley-Hughes and I duke it out over at ZDNet regarding Apple and their (lack of) netbook strategy. I say they should license Mac OS X to Dell and the Chinese/Korean netbook manufacturers, and he says that I’m a whiny cheapskate and that Apple should stay on target.

Head on over to ZDNet.com for the commentary.

Apple: The Time for Legal Clones is Now

Over the years, I’ve been a stalwart advocate of cloning Macintosh PCs. This has made sense ever since Apple moved from the PowerPC to the x86 platform, where the genetic distinction between “Mac” and “PC” was reduced to the flip of a single electronic chromosome – the use of EFI versus the PC BIOS to boot the OS. Of course, switching to EFI was not going to stop the most dedicated hackers who wanted to run Mac OS X on their PCs. Since the very moment of moving the Mac platform to Intel chips, The “Hackintosh” community has been engaged in various underground activities to make the OS boot on standardized, off-the-shelf PCs.

Click to read the rest of this story at DATAMATION

Well, that was predictable, really.

A small startup in Florida decides to go make Mac clones, and surprise, surprise, Apple starts legal proceedings and unleashes the might of its superior Army of Litigious Immortals.

Well, we all know how that one is going to end, right? Apple is a multi billion dollar technology company with tons of money at its disposal for protracted litigation. In the most likely scenario, poor little Psystar will back down, turn its tail between its legs and cease and desist.

Read the rest of this story on ZDNet Tech Broiler.

Off The Broiler
Blog at WordPress.com.