So That’s What The Vibrate Function Is For! 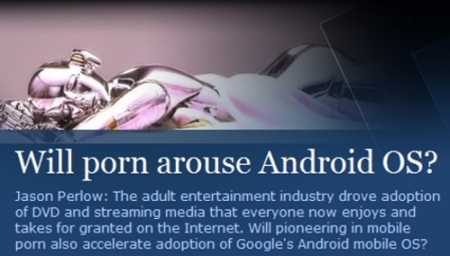 Early last week, startup MiKandi launched a 3rd-party app store for Android phones which will allow any developer to sell adult-oriented content for the Google Android platform, which includes devices such as the Verizon/Motorola DROID, the T-Mobile MyTouch 3G and the Samsung Moment/HTC Hero on Sprint.

There are certainly ideal groups of people who are capable of moving towards a 100 percent Open Source or Linux environment in both their professional and personal lives. I’m not really interested in discussing the political and ideological aspects or why someone would want to make that choice.

The greater and more important question is, who CAN switch to Linux?

I Love a Shiny New Reptile.

In my last reviews of openSUSE 11.1 and openSUSE 11, I had a number of stability issues with KDE 4.0 and 4.2 which led me to stick with the GNOME interface. However, there had been numerous reports on various mailing lists and community discussion forums that KDE 4.3 is now the fully “baked” version of 4.x, so I wanted to give KDE 4 a go again. I’m glad I did.

That Bear is Seriously High on Eucalyptus

Koala looks like it’s going to be a nice release, I’m looking forward to the final version with all the various buglets and glitches I’ve encountered all cleaned up. For those of you who like to be on the bleeding edge, definitely give the beta a whirl.

While RMS’s hatred of all things proprietary has fueled the FSF’s and GNU’s mission to create Free software alternatives for what seems like eons, the overwhelming desire for interoperability between open and proprietary systems makes his narrow-minded Cretaceous world view ripe for extinction.

As I have said in previous columns, I live as a citizen of two distinct worlds with diametrically opposing software development ideologies — the world of Microsoft, Windows and 3rd-party vendor developed proprietary software and systems, and that of Open Source and Free Software.

It’s been a while since we’ve had a hardcore Geek Sheet installment, and I promise that this one will be a real winner.

Some of you may be aware that the updated Hyper-V bare-metal hypervisor virtualization layer in Microsoft’s upcoming Windows Server 2008 R2 (Which is due to be released August 14th to MSDN and Technet customers) now has support for SUSE Linux Enterprise Server 11 (SLES) and Red Hat Enterprise Linux 5.3 (RHEL). Additionally, Linux support and performance has greatly improved over the initial Hyper-V release. Microsoft also recently released it’s Hyper-V Linux Integration Components (LinuxIC) under the GPLv2 Open Source License.

While Off The Broiler is primarily focused on food, as many of you know, I also write technology articles for ZDNet, CBS’s technology news site. Over the last few months I have been teaming up with Linux Magazine and DaniWeb columnist Ken Hess, where we broadcast live on BlogTalkRadio every Friday at 6:30PM EST on leveraging technology to save you and your business money. The format of the show is news and commentary for the first half hour, with the second reserved for special guests from the technology industry. This summer we are going to be featuring a lot of Linux and Open Source guests, so be sure to tune in.

The replays of all the shows are available at www.frugaltechshow.com, just in case you miss them.

The Open Source Community’s strength has always been in its numbers and the will of developers contributing to projects to drive project initiatives in the direction they desire simply by voting with their time and willingness to contribute. If a project no longer meets their requirements, be it from a licensing or political perspective, they simply cease working on it and go onto other things that interest them instead.

That is the beauty of of Open Source, in that it is pure Social Darwinism and Software Phylogenetics at work. Even if you have a bunch of large natural predators, such as Constrictus Siliconvallis, it’s not possible for them to swallow entire communities, even if they buy the companies that run the projects themselves. And like evolutionary trees, if projects are to be compared to Phyla, they do indeed branch off.

Cue “Eye of the Tiger” and the Jaunty Jackalope DVD

The fight of the century? GNOME vs. KDE , the two titans of the Linux desktop. Sure there are welter and lightweights that shouldn’t be ignored, such as XFCE, Enlightenment and GNUStep/WindowMaker, but let’s face it, it’s the two heavyweights that rule the roost on all of the desktop Linux distributions that are getting the lion’s share of attention, that being Ubuntu, Fedora, and openSUSE.

Click here to read the rest of this article on ZDNet Tech Broiler.