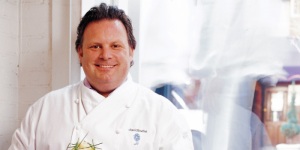 Does the name David Burke ring a bell? It should. He’s everywhere in the culinary world. Burke has competed on both Iron Chef and Top Chef, won countless awards and accolades, and has amassed quite the collection of restaurants that he owns and operates, from Las Vegas to Chicago to NYC to our very own New Jersey. Oh, and he writes cookbooks and dabbles in culinary gastronomy as well, branding GourmetPops (ready to serve cocktail lollipops) and Flavorsprays to enhance your cooking with less fat and more flavor.

I had the opportunity to speak with Chef Burke a few weeks ago about his time as a private chef in Norway, cooking for Prince Charles and Julia Child; his train ride travels around Europe, and his most memorable meal ever.

Read the rest of Elizabeth Starnes’ interview with David Burke on the Chef’s Table.

This entry was posted on Thursday, July 12th, 2012 at 8:45 am and is filed under Food, New Jersey, New York City. You can follow any responses to this entry through the RSS 2.0 feed. You can leave a response, or trackback from your own site.