Poke Me, Friend Me, Any Way You Want Me 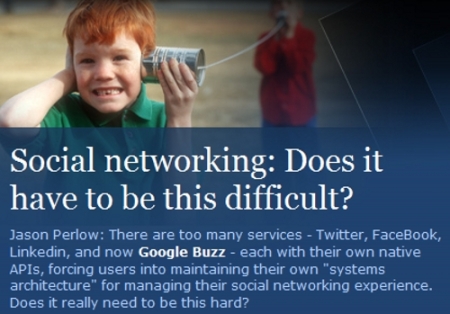 Earlier, I spoke about my first experiences with Google Buzz and how I think end-users might run into trouble with the new social networking service. Part of that discussion was talking about the behavior of Twitter and FaceBook, and how it compares to Google Buzz.

Having given this some additional thought, it occurred to me that Social Networking as a paradigm has become overly complex and baroque in its implementation.

This entry was posted on Friday, February 12th, 2010 at 2:37 pm and is filed under General, Links, Media, Tech Broiler, Technology. You can follow any responses to this entry through the RSS 2.0 feed. You can leave a response, or trackback from your own site.

One Response to Poke Me, Friend Me, Any Way You Want Me