Sausage and Peppers are among my favorite things to grill — it’s a simple, hearty dish, and in my opinion the greatest contribution to the backyard barbecue by the Italian-American culture. Next to Hamburgers and Hot Dogs, it rates in my top 5 of ideal summer foods. The dish has been immortalized in numerous films and on television by shows and movies such as The Sopranos and Goodfellas. But like the bold and intimidating characters in those films, a sausage and peppers sandwich requires dealing it an appropriate amount of respect and care — you need to source the proper ingredients and cook it properly.

Optimally you want to get your sausage from a specialty Italian deli or butcher, or from any kind of reputable butcher shop that makes sausage fresh. This sausage is from Vitamia and Sons in Lodi, New Jersey, a very Italian neighborhood with lots of specialty Italian stores in it. I don’t particularly like to use supermarket cheapo bulk-pack Italian sausage because the fat content is way too high, and that kind of stuff is much better for rendering the grease out and using the meat in things like tomato sauces where you need to add a lot of sausage flavor. 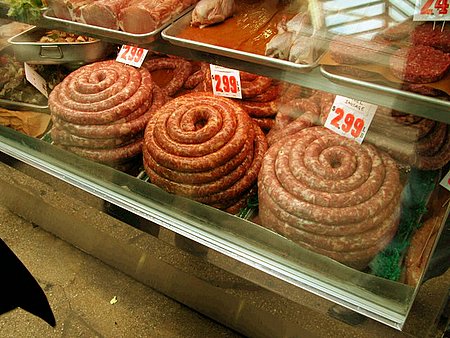 These are sausages from Pete’s Meat in the Arthur Avenue Retail Market in ‘da Bronx. This is another one of my very favorite places for buying Italian sausages. Here we’ve got the three basic kinds — sweet, seasoned with fennel seed, hot with pepperoncini chili flakes, and parsley/cheese. All are great for use in Sausage and Pepper subs, so I usually buy a mix.

I like to use a mix of different types of peppers for my subs. Medium-thick walled Italian style frying peppers such as the Cubanelle are great to use, as are Latino and Eastern-European styles such as the long Hungarian types. I particularly like Mexican Ancho and Anaheim/New Mexico style peppers for sandwiches. The smaller spicy style pepperoncinos are great for mixing into your pepper assortment as well. You could also use regular thick-walled Green Bell peppers, but I don’t particularly like them — I like to wait until they go completely red because I hate the grassy flavor of the green kind. For onions I like to use a combination of sweet Texas/Vidalia and Bermuda/Red types.

I like my peppers to be skinless when eaten on a sandwich, particularly if they are of the larger, thicker walled kind such as the Green/Red Bell, Cubanelle or Ancho/Anaheim/New Mexico type. I find that removing the skin also removes most of the bitterness and that grassy, astringent taste that I don’t like. Roasting the peppers directly over your burner or an open fire takes care of this problem.

Once you get your peppers completely charred and black on the outside, put them all in a plastic container, close the lid, and let them cool down for about 15-20 minutes. They will steam up and the skin will loosen, and you should be able to slide most of the skin off with your fingers. You can then run them under the water to remove any excess skin, and then cut them open and remove the ribs, seeds and inedible core part. If you get a little charred black skin that doesn’t come off, it’s no big deal as it adds some nice charred flavor. I then like to chop the peppers up into bite sized pieces and saute it with some olive oil, garlic, and season it with salt and pepper. Thinner walled/thinner skinned and smaller peppers can be cut up raw and sauteed with the other peppers, or you can grill them with the onions and sausage.

Sausages should be grilled on low heat with the lid closed so they can cook through and don’t get burned up in flare-ups. A way you can keep the heat under control is to grill your slices of onion around your sausage so they give up their moisture. Before grilling, I like to toss my onions and other vegetables (Eggplant slices, Zucchini, Corn) in olive oil and seasoned with salt and pepper.

Finished sausage and pepper sub. I like to get a nice crusty loaf of bread for this purpose and toast it on grill.

Sausage and Pepper Sub closeup. A New Jersey and Italian-American classic. The sausages I used for this sandwich came from Bartolomeo in Palisades Park, NJ.

This entry was posted on Sunday, August 19th, 2007 at 11:05 am and is filed under Food, General, Links, New Jersey, Recipe, Weber. You can follow any responses to this entry through the RSS 2.0 feed. You can leave a response, or trackback from your own site.