Some of you are probably aware that I am not a native-born Jersey Boy. I am, in fact, from New Yawk. Both of my parents are from Queens and I grew up on the Nassau County/Queens border near Little Neck. So when it comes to Pizza, I have a particular slant for the New York style.

Since founding eGullet, I have since learned about and dined at several of the best pizza parlors in New York City — Patsy’s and Arturo’s in Manhattan, Grimaldi’s, Totonno, DiFara and L&B Spumoni Gardens in Brooklyn, Full Moon in the Bronx, the list goes on. As a New Jersey resident, I do have to say that there are probably a scant few places that would come even close to those giants. But I submit to you that such a place does exist, and its in way the hell up Route 17 in Ramsey, and its called Kinchley’s Tavern. Stylistically the pizza they serve is very different from true New York style pizza, but its damn good pizza nevertheless. 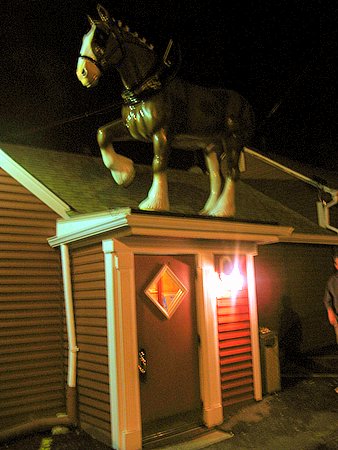 You know its a serious joint when its got a big plastic Budweiser Clydesdale on the roof. 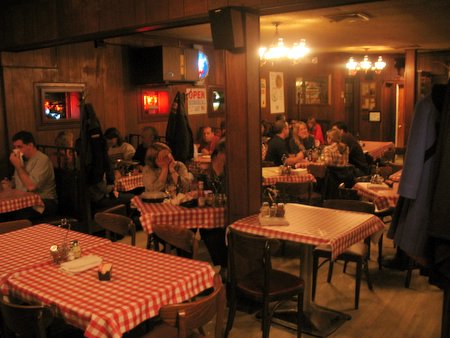 The main dining room at 9:30 on a Friday night. Go an hour or two earlier, you might have to wait — a while.

Kinchley’s has been serving pizza for at least 40 years, probably more. Originally, it started out as a bar, but then at some point, they started making bar pies.

Now, a bar pie is essentially a small pizza (approximately 12 inches in diameter) with a very thin, almost cracker like crust. In terms of sauce, its somewhat on the sweet side, unless you get the “Fra Diavolo” sauce, which is considerably spicier and is usually what we opt for. My suggestion is if you go that way, opt for the pitchers of Boylan’s Birch Beer to go with it.

Start off with a salad, because you’re gonna want some roughage. 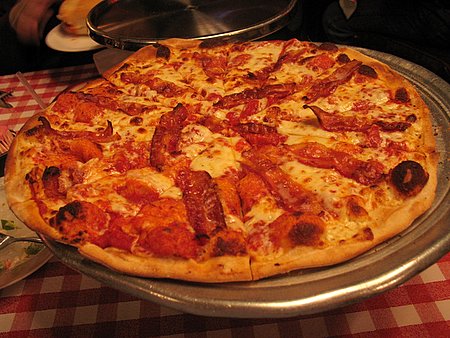 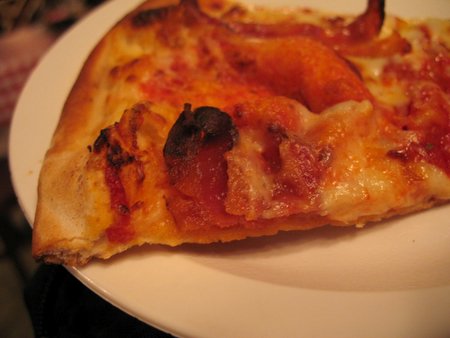 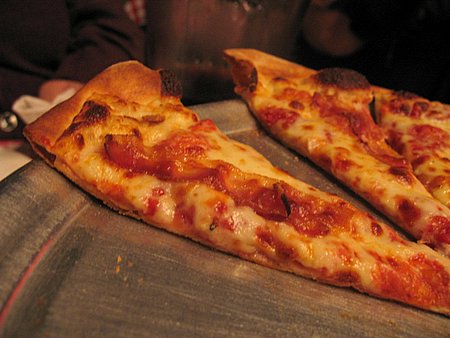 The pie disappears rather quickly, so you’ll want to put another one into the ordering queue. 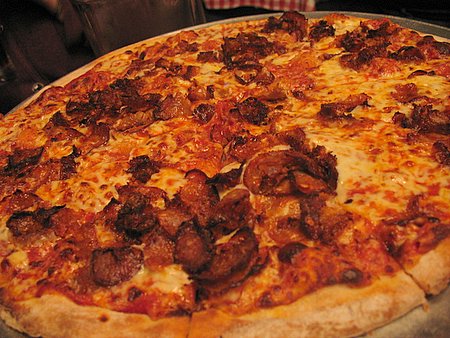 Kinchley’s also has a full bar, which apparently no longer smells smoky due to the fact that New Jersey passed its no smoking legislation last month. So if you’ve been staying away from bar-type atmospheres because of the smoke, fear not — Kinchey’s is smoke-free.

This entry was posted on Friday, May 19th, 2006 at 11:01 pm and is filed under eGullet, Food, General, New Jersey. You can follow any responses to this entry through the RSS 2.0 feed. You can leave a response, or trackback from your own site.